Speak Up or Forever Holdback Culture

The NeuroLeadership Institute (NLI) hosted and presented a webinar on its research, models, and use cases in relation to building a culture of speaking up in organisations. The NLI provided a deep insight into its behavioural tool and how many organisations of all shapes and sizes could benefit from implementing their tool in order to effect a change in culture.

What is a ‘speaking-up culture’?

Many organisations and boards have a strong focus on identifying and combating extreme behaviours through frameworks and procedures like whistleblower and complaint policies.

However, speaking up about behaviours is more nuanced than the high-risk and highly damaging complaints. This is the spectrum of speaking up and providing feedback.

A true complaints process is one that allows people to be more willing and able to speak up by creating a psychologically safe culture that normalises raising issues, ideas and feedback.

As with many culture changes, the focus falls on senior leaders and executives to begin change from the top by living values. Often those in positions of leadership are well-versed in providing feedback, but often lack the retrospective insight to how they handle feedback raised to or about them.

In all facets of this speaking-up culture, the communication is desired to be constructive with the intent to bring about improvements or change in some part of an organisation. This idea does not fall or give weight to complaining or venting acts, but to times of attempting to fix and improve the issue.

Conventional wisdom suggests that if someone has something to say they’ll say it. The NLI noted that research has shown that often people do not speak up, even when doing so would help themselves or others.

Many often feel the need to self-censor in the hopes of not feeling like the ‘odd one out’. Humans tend to have a bias that situations ‘only happen to me’, which leads to missed opportunities to speak up for the sake of themselves and others.

What can be gained and lost from speaking-up?

The results of speaking up shows it lifts engagement and performance throughout an organisation. However if opportunities are missed, how much is left unsaid?

If we imagine that a company of 10,000 employees each have one great idea per week (so 52 ideas per year) totally 520,000 great ideas. Research has said to us only an average of 30% of the time do employees speak up about their great ideas. This ultimately leads to 364,000 ideas silenced annually for this (hypothetical) organisation.

If employees felt their opinions counted, the NLI research suggests there is the potential of seeing:

The NLI has found that 40% of those who witness questionable behaviour wasted two weeks pondering instead of speaking up. That is two weeks of productivity lost as this deliberation takes over the prefrontal cortex of the brain and massively drains cognitive capacity in doing proper business decision making. Not only that, but that is two weeks of unrelieved stress impacting on sleep, eating and the mental health of the employee.

In addition, if one side of the value-add coin is increasing organisational diversity and inclusion, then the flip side is encouraging a culture of speaking up. To ensure that the efforts in recruitment for greater gender and cultural balances are not turned into a revolving door, employees need to be afforded a psychologically safe workplace that encourages speaking up by hearing and listening to ideas raised. If not, those efforts will simply be lost.

What are the common roadblocks preventing speaking up?

Despite some promising value drivers, often people still do not speak up. These roadblocks have been synthesised into three areas: ambiguity, power dynamics and social threat.

It is important to recognise the fact there will always be an inherent threat when speaking up and raising an issue. No matter how easy you may let the small or big bird out of the cage, our brain’s instinctive reaction to bad news is a heightened level of alertness which ultimately narrows the perception of the receiver and negatively impacts them (by going on the defensive). This is natural no matter if the issue is with the receiver directly or not, our brains function to hear less and reduces abilities to collaborate and instead, favours shooting the messenger.

How can you jump over some of these roadblocks?

To help create a culture of speaking up, the intertwined concept of psychological safety needs to be established. This means encouraging an organisational climate in which people are safe to express ideas, concerns and mention mistakes without fear of embarrassment or retribution.

As mentioned, there tends to be a strong focus and presence of larger complaint processes, especially in the space of human resources and legal/compliance issues. Although important, it is just as important to step back from the big things and look deeper into the smaller items that often lead to the larger complaints. More often than not, many bigger complaints stem from sustained smaller actions and microaggressions that have not been appropriately identified and managed.

“If people can only speak up anonymously, that is a glaring indicator a problem exists, and psychological safe spaces are not evidenced in the workplace.”

For a positive culture of speaking up, a balance is needed between helping people understand when, where and how to speak up. It should be noted this is a fine line, as not all communication opportunities and channels warrant constructive forums. Meetings are great for idea sharing, but choosing the right time and channel to question behaviours or raise feedback requires more thought.

This thought process falls back on a continuum that essentially escalates the level of threat depending on the kind of speaking up being done. As depicted, the greater of the items raised the greater level of threat being brought forward. This also correlates with the amount of thought that should be done in order to create a constructive conversation with your peers or leaders. 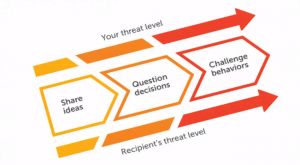 [image attributable to the NeuroLeadership Institute]

It starts with those ‘at the top’

It has become common knowledge that leaders of organisations and those in positions of power set the tone for change and actions. What leaders do coincide with what others understand to be the culture of the organisation. It is vital leaders, executives and boards are aligned in introducing and living cultural habit changes for them to have maximum effect.

Creating a culture that labels speaking up as courageous and not troublesome is one that can only be done by boards, executives and key leaders in the organisation. Role modelling the speaking up behaviours and developing the soft skills when reacting to feedback are but two real actions that can start a change tomorrow.

A tool for change:

In order to begin a journey for change, you need a map. The NLI advocates for a simple three step model to approach to utilise when confronted with a situtation you may want to speak up on.

This is an issue that effects everyone, benefits everyone, and needs to be shown everywhere in an organisation for change to occur. As with most cultural changes it will not occur overnight, however it is important boards and leaders are properly engaged in order to instigate a sustained culture of speaking up.

Getting in touch is easy.

Find us on a map

Search through our archives to find what you're after: